Asda is hoping to take on the might of Amazon with the launch of a one-hour grocery delivery service – but each delivery will set you back £8.50.

The supermarket said it will become the first grocer to offer its full online product range, with customers living within a three-mile radius of its stores in Halifax, Rotherham and Poole the first to try it.

Rivals, including Morrisons, Tesco and Sainsbury’s already offer one-hour – or faster – delivery services through Deliveroo, Uber Eats, Amazon and other providers – although none offer a full range of products.

Shoppers can order up to 70 items and have them delivered within an hour, or buy an unlimited basket which can be delivered with a four-hour window, Asda said.

If popular, bosses hope to roll it out to more customers at other stores – although the £8.50 delivery fee may be prohibitive, with rivals charging far less for each delivery, albeit with fewer products to choose from.

The supermarket is also extending its partnership with Uber Eats from 200 to more than 300 stores, with 500 products including fruit, vegetables, beer, wine and spirits and meals for rapid delivery.

Simon Gregg, Asda’s vice president of online grocery, said: “After successfully trialling an Express Delivery service, we know this is something that our customers want as part of our online grocery proposition and we are delighted to be able to offer this service to even more customers.

“The launch of our new Express Delivery service and extension of our existing partnership with Uber Eats to 300 stores means that customers can get their order delivered to the doorstep at market-leading pace.”

Most UK supermarkets are looking into ways in which they can get groceries to customers more quickly.

Tesco, which had previously not offered any rapid delivery service, launched its own Whoosh trial in Wolverhampton with plans to expand it.

Sainsbury’s also operates its own service, called Chop Chop, which it expanded to 50 stores in 20 cities last year.

Waitrose announced plans to shut down its own Rapid delivery service, which it launched in 2018, saying it would instead focus on expanding its partnership with Deliveroo.

Morrisons offers same-day rapid deliveries as part of its tie-up with Amazon, which also offers customers its own Amazon Fresh products.

Other delivery firms in the grocery market include Gorillas, Getir and Fink, which have all raised significant sums of money from investors looking to cash in on the growing industry. 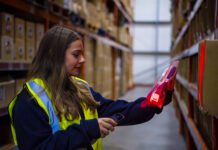