Waitrose and John Lewis will today unveil this year’s Christmas advertising campaign, which – inspired by the kindness shown by the British public during the pandemic – encourages viewers to give a little love to others.

The advertising is one element of a major campaign by the two retailers, which also launches today, on National Kindness Day, under the strapline ‘Give A Little Love’. The campaign aims to make a lasting difference to some of those hit hardest during 2020. 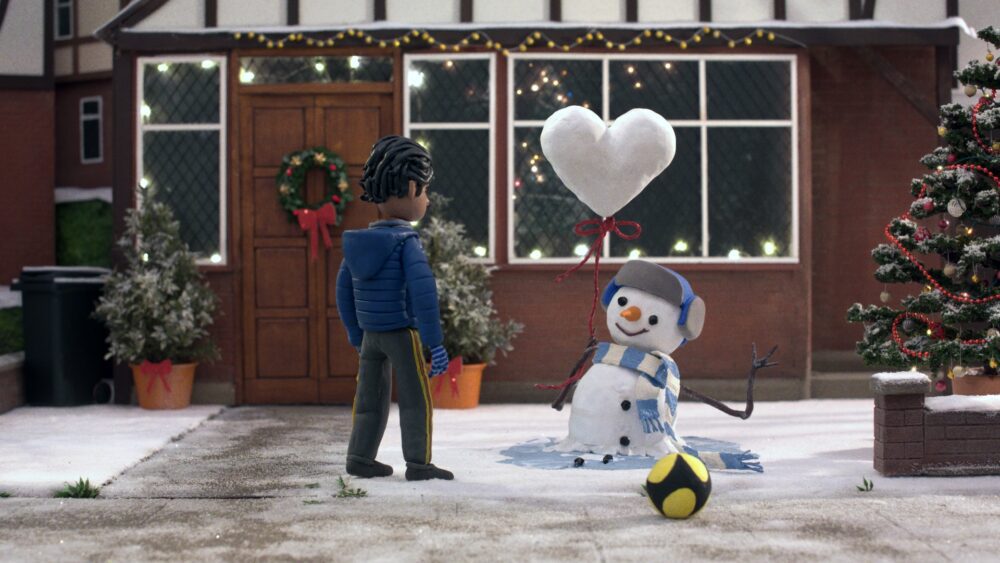 Together John Lewis and Waitrose are aiming to raise £4m for two charities: FareShare, which helps those facing food poverty and Home-Start, which works with parents who need support.  £1m will also be donated by shop Partners to charities who support families in their local communities. The charities will use these donations to provide food, comfort, emotional support and advice to at least 100,000 families in need.

Since the pandemic started FareShare has had to double the amount of food it distributes to meet the rising demand, and over one third of Home-Start centres have seen an increase in demand for its services.

The story of ‘Give A Little Love’ was created by advertising agency adam&eveDDB. A two-minute ad is designed to inspire the nation to give a little love to those around them, while a complimentary 30 second ad carries a direct call to support the two charities. 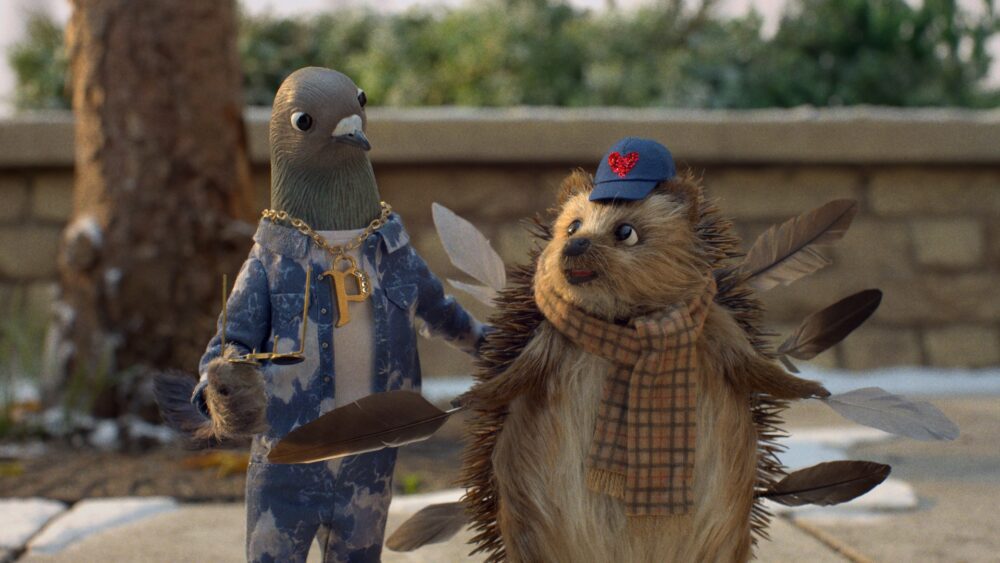 Customers will be encouraged to give a little love in five different ways; making a charity donation, buying campaign products with 100% of profit donated to the charities, using their loyalty card to increase the Partnership’s donation, giving a little love to someone they know who needs it and helping in their local community.

Customer donations up to the value of £2m will be match funded by a donation from the John Lewis Partnership. A further fund of over £1m has also been created to ensure all of the retailers’ shops will be actively partnering with FareShare and Home-Start and a range of local family charities in the communities they serve.

The two minute advert is a celebration of different forms of moving art – from animation and claymation to CGI and cinematography.   It is made up of nine different vignettes created by eight different artists who are leading experts in their particular art, including Chris Hopewell, who has created music videos for Radiohead and Franz Ferdinand, and French animator Sylvain Chomet.

The scenes are connected to create a long chain of giving, as each film passes the campaign’s heart emblem on to the next part of the film.  The storyline illustrates how acts of kindness, large and small, can multiply and positively impact the world in which we live as we pass them on to others. The different ‘moments’ of kindness captured in the film are designed to appeal to different audiences, from children upwards.

The 30 second complementary advert was created by four post-graduate students from Kingston University who were chosen for their distinctive styles, which are joyful, yet humble. Both adverts were directed by acclaimed British director Oscar Hudson.

In another step away from its traditional approach, for the first time a new song was commissioned for the Christmas campaign.  Written and recorded by British soul singer, Celeste, the song is also called ‘A Little Love’.  Last year, she won a Brit Award and in January this year she was crowned BBC Music’s Sound of 2020.  Every time the track is downloaded Celeste and her record label Polydor will make a 10p donation to the campaign.

James Bailey, Executive Director of Waitrose, said: “The pandemic has highlighted the growing inequalities across the country, with those who are already most vulnerable disproportionately impacted. Through our partnerships with FareShare and HomeStart we’re aiming to make a big difference to the lives of 100,000 families in the UK.

“Each year festive adverts come and go – and some are remembered more vividly than others. But our advertising this year will leave a lasting legacy – and in that way, we hope it won’t just be for Christmas.”

“We did consider whether it was right to produce an ad this year at all. However, FareShare and Home-Start, told us how much of a difference this campaign could make, both on a financial level and in raising awareness of the incredibly important work they do with families across the UK.”

Pippa Wicks, Executive Director of  John Lewis, said: “We recently set out  our ambition for our business to be a force for good – so we decided that this year was the year to break the mould and do something different.

“We have a long tradition of helping support the communities which we serve, so as we launch one of the best loved assets, our Christmas ad, it’s fitting to take this one step further by working hand in hand with two incredible charities supporting families in need.

“We were humbled by the kindness shown by the British public during the pandemic. We want this campaign to be uplifting and to inspire everyone to give some kindness in their own way this Christmas, especially to those who need it most. The pandemic has proved that it’s our small acts of love and kindness, particularly in challenging times, that captures what it is to be human; and when one small act of kindness multiplies it can have a lasting impact

Peter Grigg, Chief Executive at Home-Start, said: “Families are running on empty. The pandemic has been hard for all families, but it’s been toughest on those already facing challenges around mental health, low incomes, and other challenges in their lives. I have been overwhelmed by the kindness shown in our communities during the pandemic, but I know there is so much more to do. That is why I am so proud that John Lewis and Waitrose are supporting Home-Start with this amazing campaign. With the help of John Lewis and Waitrose Partners and customers we will be able to work with more families when they need us most.”

Lindsay Boswell, Chief Executive at FareShare, said: “This year has been incredibly tough for so many and FareShare has seen the need for our food skyrocket. The number of charities and community groups applying to receive food through FareShare has more than doubled and 90% of the organisations we work with expect demand to remain the same as at peak crisis levels, or even increase through the winter.

“We continue to provide over two million meals per week to vulnerable communities across the UK, and more than two thirds of the food we distribute goes to children and families, so we know that there is a real need for our work at this time.

“We are so thrilled to be partnering with Waitrose and John Lewis, which will help raise awareness of the work FareShare does in supporting thousands of families every day. The extensive nature of this joint partnership is remarkable and will enable us to have a big impact on the lives of so many during the tough months ahead.”

Commenting on her song Celeste said; “I felt honoured to be asked to take part. I wanted to create something that felt classic but still true to who I am as a writer and performer.”

The adverts – which went live on social media channels at 7am this morning – will first be broadcast on TV tomorrow evening during ‘The Voice’ on ITV.

A range of ‘Give A Little Love’ merchandise, including a heart shaped umbrella like the one in the ad, go on sale today on Waitrose and John Lewis websites and in their shops, with all profits from the sale of the products going to the appeal.

As well as fundraising Waitrose and John Lewis will offer practical support to the charities. Its expert Partners will give nutrition and nursery advice to Home-Start community groups and both retailers will donate surplus stock direct to families in need.

The campaign builds on the charitable support the Partnership has given during the pandemic.  Since the pandemic broke out the Partnership has committed £2.7m to charities and local communities; including designing and producing products ranging from face coverings to mugs and bags to raise funds in aid of NHS Charities Together.  Waitrose has recently passed the three million milestone for meals redistributed to those that need them through the FareShare scheme and the supermarket will continue to donate surplus food. 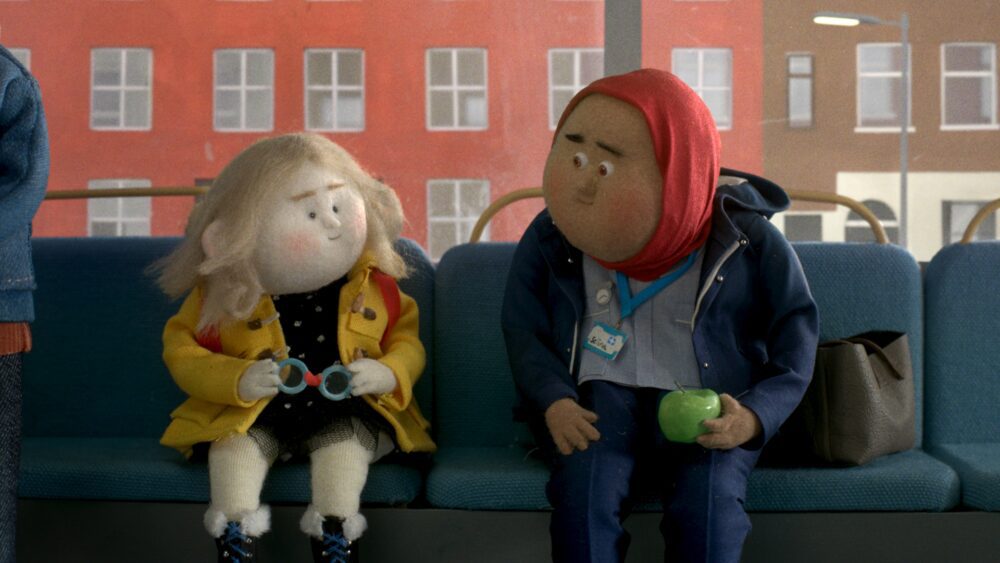