With over 65 sport and streetwear stores on British high streets and a powerful online offering, Footasylum are so much more than your everyday retailer.

They have spent the past few years learning from their customers and evolving alongside them. In 2018 they discovered that their core audience has an insatiable appetite for viral social content. They knew that to best communicate directly with them they needed to create their own original, emotive and on trend content and build their community around this.

Footasylum made the bold move to supplement their retail offering with a standalone entertainment platform in the form of the revamped Footasylum YouTube Channel.

They have fostered the careers of young presenting talent, such as Bash The Entertainer, KSI, Chunkz and Yung Filly. These rising stars have appeared in Footasylum commissioned original series such as “Truth Asylum”, “Does The Shoe Fit” and “Chef Asylum” and are now well established stage names in their own right as well as much loved ambassadors for the brand.

Footasylum constantly push the boundaries for how brands connect with this traditionally brand non-committal Gen Z audience. Their recently completed YouTube reality show, “Locked In”, which was produced in conjunction with Cowshed Social, is testament to this – having an impressive 8 million cumulative views of the debut series already.

The first of its kind, “Locked In”, housed 10 British YouTubers, for a fortnight, stripped them of the technology that has made them famous, setting them a series of tasks to complete under the watchful eyes of the viewers, who were given the chance to control the activity in the house via the comments section.

Si Lloyd, Culture Marketing Manager at Footasylum commented: ‘Locked In has been our most ambitious project to date, the concept gave our audience a full immersive experience and allowed them to drive the narrative. The runaway success of our Footasylum YouTube channel is clear evidence of the growing appetite our Gen Z audience has for original content consumed on social media. We believe that this is an environment where we can create a genuine connection with our audience, learn from them, nurture them as loyal customers and this new format will give them a reason to unite and have a proper laugh in an otherwise difficult time.”

The move into the entertainment space has been a resounding success, and by October 2020, Footasylum’s YouTube channel had amassed over 138 million views, 1.4 billion impressions, 18 million hours of watch time and they are celebrating over 750,000 subscribers without any ad spend.

Not dropping the baton for a minute, Footasylum released their first ever Christmas advert, which clashed festive cultures and challenged its audience to reimagine our traditional Christmas. The ad, titled, ‘Tradition is Boring’ introduces Harry and Sandra Redknapp in a picture-perfect Christmas scene before chaos descends on them in the form of the UK’s leading YouTube Talent Chunkz, Yung Filly and Amelia Dimoldenburg.

Set against a full ‘Downton Abbey’ style backdrop the advert plays on the generational gap and promotes the high-energy, positive chaos of Gen Z’s new media stars.  The 40” and 30” ads have been created in collaboration with award winning creative production company Chief, and Footasylum’s in-house creative teams and are now running on Sky and Channel 4 channels.

Howard Tattersall, Footasylum Head of Marketing comments:  ‘We are a contemporary brand, increasingly known for entertaining our consumers and audiences with funny and engaging content, featuring celebrities they can relate to. Our first festive advert brings all that together – subverting the traditional Christmas and bringing it bang up to date for our consumers and their families.’

Who knows what 2021 will bring, we for one will be watching closely to see what Footasylum deliver – and urge other brands to take a leaf out of their book if they want to keep that all important Gen Z audience engaged. 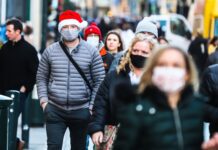 Could Christmas be cancelled or do we all just need to stop panicking?