B&M has warned investors to expect a drop in revenue in its current financial year as the company comes off an excellent performance during Covid-19.

The retailer said it was already seeing signs of a slowdown compared to the frenzy a year ago.

Since the financial year ended in late March sales have been 1% lower than this time last year.

It therefore expects to see a decline in like-for-like revenue in the current financial year from B&M’s UK business, but believes it will still be ahead of where it was before the pandemic.

It would be a long way to fall if B&M were to drop back to the performance it saw before Covid-19 hit.

In the year to the end of March B&M reported a doubling in pre-tax profit to £525 million, and it expanded its portfolio by an extra 43 shops.

Revenue rose 26%, and the business said it had created around 7,200 new jobs in the UK.

The last week of March was the company’s best in history, helping to push its results above previous guidance.

“The core B&M UK business, as an essential retailer, traded throughout the year and welcomed a number of new shoppers, with colleagues working tirelessly to maintain on-shelf availability and provide a safe shopping environment,” chief executive Simon Arora said.

“We also made strong progress in France, despite many stores being closed for up to 10 weeks throughout the year.”

He added: “Looking ahead, there are many uncertainties as society slowly emerges from lockdown and trading patterns are likely to be unpredictable for much of the year.”

Hargreaves Lansdown analyst Susannah Streeter said that B&M will now be facing tougher competition as other retailers were finally allowed to reopen their doors.

“But part of B&M’s strength lies in the location of its stores, mainly in retail parks out of town where footfall has rebounded much more sharply than in high street locations,” she said.

“Its ‘pile it high sell it cheap mantra’ is also likely to continue to be a big draw for shoppers while economic uncertainty remains as consumers usually opt for value brands when times are tight.” 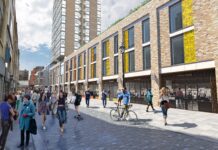