This year for its annual festive campaign, Nespresso is collaborating with the Colombian fashion designer and artist Johanna Ortiz: Under the creative idea “Gifts of the Forest”, specially chosen boutique windows are being enhanced through augmented reality – sound transducers turn them into a sound object with “Forest Sound”.

Nespresso, the manufacturers of coffee and coffee capsules owned by Swiss food group Nestlé, has launched an unconventional campaign with a new approach to retail experience: Visitors to boutiques worldwide encounter an extraordinary showcase design. Using augmented reality (AR) and sound technology, the campaign concept “Gifts of the Forest” is brought into the pedestrian zone and the motto of this year’s “Festive Campaign” is impressively extended into the digital space. A matching interactive competition, which is activated by scanning a QR code on the boutique window, complements the campaign with a gamification approach. 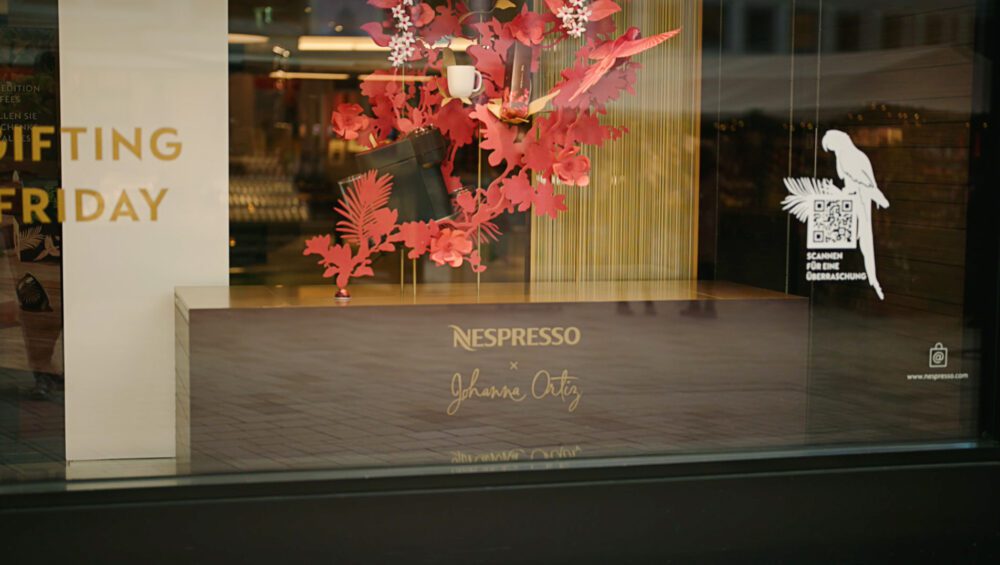 Tiziana Della Croce, Global Shopper Brand Experience Manager at Nespresso, says: “LIGANOVA has managed to enhance our storefronts around the world with a unique retail experience on a digital level and provided them with a walk-in activation – not just for a single flagship store, but as a global campaign for boutiques worldwide. This year we are setting new standards with our Festive Campaign.”

The retail campaign’s creative idea for 650 boutiques worldwide was created in collaboration with the Colombian fashion designer and artist Johanna Ortiz; the branding experts at FutureBrand, based in Paris, developed the creative retail concept. LIGANOVA was responsible for the design engineering, production and global roll-out in over 650 boutiques worldwide, as well as the development of the phygital experience world.

“Gifts of the Forest” runs until the end of January 2022. Looking to increase brand awareness for Nespresso and create a “drive to” store, the campaign was primarily intended to ensure relevance and visibility among the younger and more digitally savvy target group.